The History of Catholic Education in Marshfield In 1882, construction on the brick school building began and was completed in 1888.  A new school building was constructed in 1897 and the cornerstone laid on July 11 of that year. The construction was completed on November 14, 1897. The school was expanded in 1927 and dedicated on April 29, 1928. On July 18, 1943, a fire destroyed the school which was rebuilt and dedicated on October 15, 1944. In 1996, with the development of the middle school, St. John went from K-8 to K-6.  In 2006, when the middle school concept was fully incorporated, St. John became a primary building housing grades pre-school through grade two. The parish school opened in September 1917 with 152 students and became the second Catholic grade school in Marshfield.  In 1996, with the development of the middle school, Sacred Heart went from K-8 to K-6.  At the end of the 2000-2001 school year, because of declining enrollment, Sacred Heart school closed its doors.  In 2019, it was razed because the cost to maintain it was more than the cost of removal and building of a new structure.

Our Lady of Peace 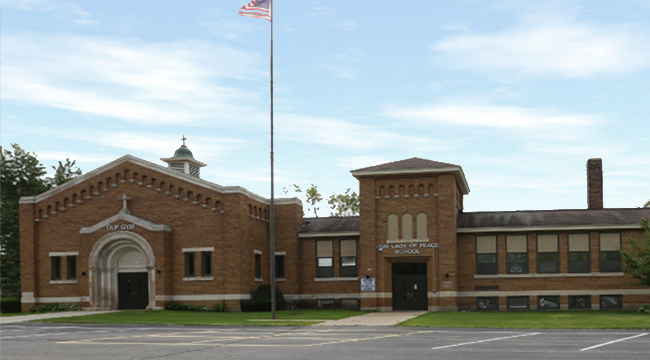 In 1948 Father Dillenburg broke ground for Our Lady of Peace (OLP) School; it officially opened  in 1949. It was dedicated by Bishop Fulton J. Scheen.  This was now the third Catholic grade school in Marshfield.  In 1996, with the development of the middle school, OLP went from K-8 to K-6.  In 2006, OLP became an intermediate school housing grades 3-5. In 2008 pre-school became part of the Early Childhood Learning Center (ECLC). The 3 and 4 year old pre-school was in the OLP building. In 2010 the ECLC closed and the 3 & 4 year-old pre-school programs moved to the St. John's building.

The official announcement of the establishment of Columbus High School was made in January 1950 by His Excellency, the Most Reverend John P. Treacy, Bishop of La Crosse.  The sponsoring of the project was left to the Very Reverend Hugh J. Deeny, pastor at St. John the Baptist Parish.  Ground broke on April 22, 1951, and the class of 1952 was able to hold its graduation ceremony in the newly constructed auditorium.  This was the first official graduating class of Columbus High School.  In 2002, at the direction of then Bishop Burke, Columbus High school became Columbus Catholic High School.

In September 2007, The ECLC opened its doors for children 6 weeks – Kindergarten.  The ECLC building was housed in the old dorms/convent building.  In 2008 the 3 & 4 year-olds moved to Our Lady of Peace to join the pre-K programs there.  The ECLC closed in 2010 because of profitability.

In 2001, then Bishop Burke announced that the parish schools (except for Sacred Heart) would unify in hopes of building a stronger system of schools by sharing resources, providing just compensation for the staff, working together to seek funding, and to be better prepared to meet the challenges of Catholic Education in the future.  In September of 2002-03, the unification of the Marshfield Area Catholic Schools (MACS) took place.  In June 2010, the school system, including St. John the Baptist  Primary, Our Lady of Peace Intermediate, Columbus Catholic Middle, and Columbus Catholic High School became Columbus Catholic Schools.